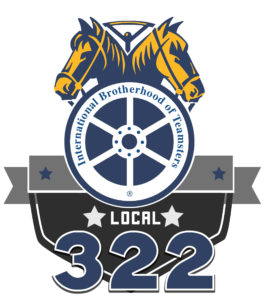 International Brotherhood of Teamsters The Teamsters Union is currently made up of 1.4 million workers who are employed in both public and private industries. There are approximately 500,000 retired members of the Teamsters in the United States and Canada who maintain their affiliation with the Union and support important labor issues for working people. Union solidarity As employees of your company, shop, or plant where you work you only have numbers to protect you while management and executives have numerous resources available to accomplish their goals. With your numbers, when you work together with us in unison, we can achieve better wages and working conditions.

I hereby apply for admission to membership and I authorize Local Union No. 322 to represent me as my exclusive collective bargaining agent until further notice. In return for the services I receive and irrespective of my membership status in the Union, I hereby authorize and direct my employer to deduct from my wages each and every month my Union dues consisting of Initiation Fees, Monthly Dues, and Assessments owing to the Union as a result of my membership, upon written orders of the officer thereof, and direct that such amounts so deducted to be sent to the Secretary-Treasurer of the Union for and on my behalf. This dues check-off authorization is neither conditioned on my present or future membership in the Union, nor is it to be considered as the quid pro quo for membership. Should I resign from membership, my employer is to continue deducting monthly dues, but should no longer deduct any assessments. This authorization and assignment shall be given for the term of the applicable contract between the Union and my employer, or for one year, whichever is the less, and shall automatically renew itself for successive yearly or applicable contract periods thereafter, whichever is the lesser, unless I give written notice to the union and my employer at least 60 days, but not more than 75 days, before any periodic renewal date of this authorization and assignment of my desire to revoke the same.

Big Business spends big money in Washington to influence members of Congress and push their anti-worker plans. They outspend working families on politics by more than 15-1. Through grassroots political action and aggressive lobbying on Capitol Hill and in State Houses and City Halls across America, Teamsters have stopped some of the worst attacks on working people. But Big Business is pushing their agenda harder than ever. That means we have to fight back stronger than ever. And we have to move forward with our own programs, like improving job safety, fighting for affordable childcare, and stopping abuses by corporate health providers and insurance companies. You can take a stand for working families by contributing to DRIVE – the Teamsters’ political action committee. Your contribution will support grassroots action by Teamster families to stand up to Big Business interests. And your membership to DRIVE will help elect political candidates who care about working people. Contributions to DRIVE support a wide range of Teamster activities: - Keeping members and their families informed on the key issues that affect our future, including voter guides that show the records of our Senators and Representatives in Congress. - Rallies, news conferences, advertisements, and phone banks to build support on issues of concern to working people. - Voter registration, and financial support for political candidates who will stand up for working families. DRIVE is non-partisan and independent from any political party.